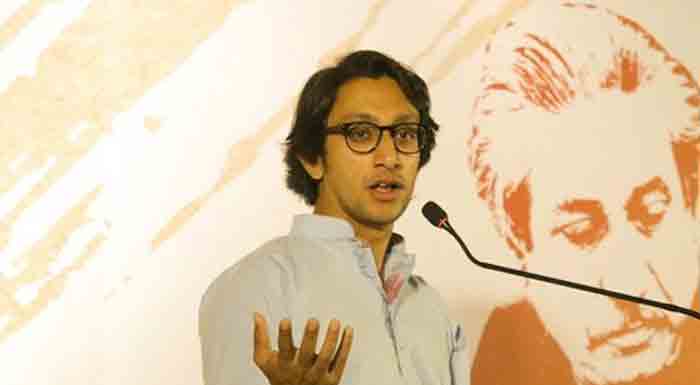 His style of functioning is more meticulous: he loves advance planning, minimum or rather no self-publicity, but beneath his benign exterior lies a stern taskmaster.

In his unshakeable commitment to the cause of a secular, democratic, prosperous Bangladesh, he is as much a passionate Bengali as his legendary grandfather was, and his aunt Sheikh Hasina and parents Shafiq Ahmed Siddiq and Sheikh Rehana are.

He is the Trustee at the Centre for Research and Information (CRI). Radwan (Bobby to friends and colleagues) is the brain behind creative projects – from conceiving the Mujib graphic novel to co-producing the docufiction ‘Hasina: A Daughter’s Tale’ to pulling off the ‘Joy Bangla Concert’ to editing the country’s premier policy-based magazine WhiteBoard.

The common element in all these projects is a driving passion to enrich the Bangabandhu-Liberation War legacy and record it for posterity, for generations of Bangladeshis as yet unborn.

Radwan loves presenting the legacy less as history and more as stories — in the form of comics, films, and concerts. He feels the GenNext pulse and knows what works for them as he seeks to get them to delve into the country’s history and imbibe its great values in them.

The graphic novel ‘Mujib’, based on ‘The Unfinished Memoir’ of Bangabandhu, is the first of its kind in the country, presenting history to toddlers as comics. He loves appearing in interactive sessions with youths as a friendly next-door figure rather than a towering hegemon full of boredom and bombast.

A politics and history graduate from the London School of Economics and Political Science, Radwan is the Editor-in-Chief of WhiteBoard, a quarterly covering the whole gamut of policy issues, the first instalment of which presented the policies adopted by Bangabandhu in post-independence Bangladesh. That is a chapter less explored and often misinterpreted, something that needed fixing.

In 2013, he envisioned a docudrama on her aunt and current prime minister, Sheikh Hasina, narrating her ordeals beginning with the assassination of her father and nearly the entire family.

Working closely with the director Piplu Khan for five years, Radwan painstakingly sifted through all available evidence, physical and anecdotal, at home and abroad that might shed some light on the history they were recreating in visual form. When it finally launched in 2018, it earned local and global acclaim.

“While most historical docudramas in our country are ‘officious’ in tone, Hasina: A Daughter’s Tale stands out in its narrative. The film focuses on storytelling, bringing in engaging facts and moments that would otherwise remain unheard of. The director’s camera even made its way to my aunt’s kitchen and library too,” Radwan once said.

“It took five years of effort to get the visual narrative on screen. Down memory lane, down the trail left by the Father of the Nation, and anywhere a story was waiting to be heard, the crew have pulled out all the stops to bring it on screen, and it is safe to say that the effort was fruitful,” he would add.

The setting of the film’s beginning was in Belgium when the land phone rang ominously and transmitted the news that her father and the entire family, except herself and her sister, were gunned down in their residence in Bangladesh on August 15, 1975.

That real-life story, portrayed in the film, foreshadowed the trying time setting in on her life and she had to wait six long years to force her entry back to the country. The killers of her father, the prime minister of the country until his assassination, were endowed with indemnity, and talking about his ideology was banned on the land.

He recalled that period: “It was in 1986 when we came to Dhaka and I was admitted to a kindergarten school in Banani. But I had to change that school. I was annoyed and asked my mother ‘why do I have to change?’ She replied the killers’ sons are here. I asked ‘how do the murderers remain at large?’ Then I was told about the Indemnity Ordinance.”

“Our family never hides history from us. So we were briefed about the brutality,” he added, recalling that the children of his age did not know anything about Bangabandhu at that time.

The eldest among three children of Bangabandhu’s younger daughter Sheikh Rehana and academician Shafiq Ahmed Siddiq, Radwan was born on May 21, 1980.

His sister Tulip Siddiq is a British MP representing London’s Hampstead and Kilburn constituency. Their father, Shafiq, had worked in several universities in Bangladesh and abroad.

Radwan made a substantial global impact talking about Hasina’s future role in Bangladeshi politics in a scathing critique of the interim government’s democratic credentials in an interview with British broadcaster David Frost’s “Frost over the World” show on Al Jazeera during the 2007-08 military-backed caretaker government.

It helped spark international calls for Hasina’s release and the lifting of the emergency rule.

As Prime Minister Hasina is presiding over a glorious decade of Bangladesh’s development, Radwan seems to cut out as a GenNext icon. His withdrawn, self-effacing style that avoids controversy and focuses on the job may just be the right mix to attract the aspirational youth for the cause of a ‘Sonar Bangla’ that his grandfather dreamt of and aunt has set in motion.